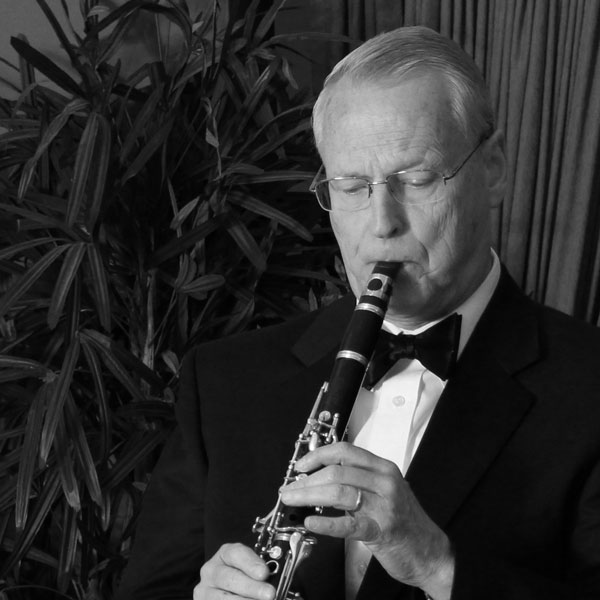 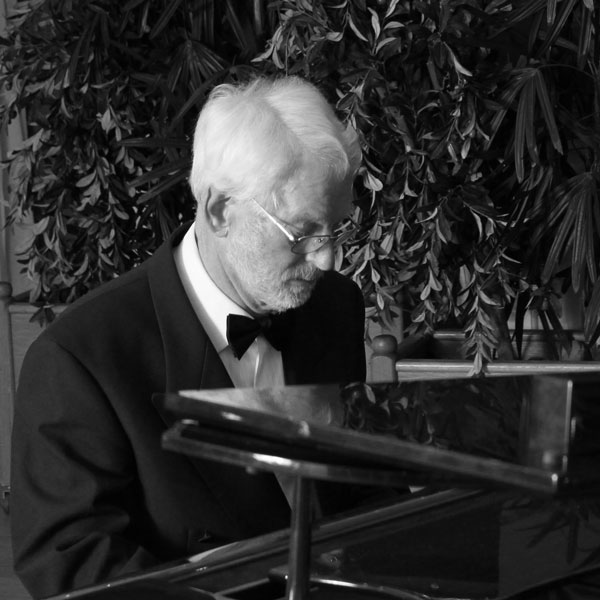 The name of our trio is derived from that of the famous Los Angeles ballroom where the style of jazz known as ‘Swing’ is generally accepted to have been born. ‘Palomar’ evolved as a result of collaboration between Chicago born Ron Hockett and pianist/trumpeter Ray Simmons as a clarinet and piano duo, following invitations to perform together at a handful of informal jazz concerts. During these sessions similarities in musical thought and expertise revealed a mutual passion for small-group ‘chamber jazz’, a highly popular sub-genre of the ’30’s and 40’s. These duo sessions proved capable of producing excitement and enthusiasm in abundance for jazz lovers and non-afficionados alike. It was a natural step to invite local drummer Craig to join the duo to create a three piece group modelled on the Benny Goodman trio.

Jazz with its emphatic toe-tapping beat and brash juxtaposition of daring harmony and syncopation was in the mid thirties still primarily dance music using forces of anything up to a dozen or more musicians. When in 1935 Goodman teamed up with virtuoso pianist Teddy Wilson for an informal session at a party, he and his producer John Hammond soon realised that the small group setting allowed for an intimacy not unlike classical chamber music that asked, indeed demanded to be listened to. In the first part of a typical concert, Palomar explores the swing era in general and showcases the pride of place that Goodman and his trio held within it. Examples can be practically anything from the Goodman repertoire but such favourites as ‘Stomping at the Savoy’, ‘Body and Soul’ and ‘Avalon’ are certain to be included. Part two in a more generalised sequence looks at small group contributions by other great jazz artists from a wider chronological scale, from Jelly Roll Morton (self-styled Inventor of Jazz’), to Goodman’s arch rival, eight times married Artie Shaw, and on to Dave Brubeck and others from the post-war ‘modern’ period – all peppered by oddities and novelties reflecting an intriguing facet of a great twentieth century art form.

Our original clarinet player Ron Hockett spent many evenings whilst still at high school jamming with the likes of Bobby Hackett, Peanuts Hucko and Bud Freeman. After graduating from Princeton he was appointed Principal Saxophone and Clarinet Soloist with the US Marines Band in Washington. In 1999 he left the military to join Jim Cullum’s band in San Antonio Texas. In2011 he moved across the Atlantic to Norwich, England, where he became an inspirational and highly respected figure in the East Anglian Jazz scene. He moved back to the States in 2016 since when his place in Palomar has been taken by local clarinetist Tim Densham (see below).

Ray Simmons (keyboard) was for 19 years Principal Trumpet of the Royal Philharmonic, enabling him to work with some of the worlds finest conductors and soloists. In that capacity he also had the privilege of sharing the platform with some of the great jazz artists of the day such as Dizzy Gillespie and Buddy Rich, even taking part in a mid-Atlantic jam session on the QE2 with Andre Previn. Throughout his time in London he was very active in the London session scene in addition to teaching at the Guildhall School of Music. In 2001 after a five year stint with the Stavanger Symphony in Norway he retired from full-time trumpet playing and now lives in Beccles where he is delighted to have rediscovered a talent for, and a love of the jazz piano.

Tim Densham (clarinet) has been with the Sole Bay Jazz Band with its resident base at Ditchingham Pavilion for over forty years. After his first gigs (for 10 shillings) in ‘The Tailgaters’ his playing career flourished in the ’60’s with the Blythe River Stompers of Southwold, the Norwich based Collegians and the Tom Collins Band from Colchester. With the Sole Bay under Fred Ward’s leadership he worked with some of the British greats including Kenny Baker, Alex Welsh, Jack Parnell and Roy Williams, as well as American legends Billy Butterfield and Kenny Daverne. His work with Ron Hockett over the last five years has inspired him to embrace the Palomar clarinet style with great aplomb and, when asked nicely, can also deliver a mean saxophone.

Craig Hipperson (drums) first picked up a pair of sticks at the age of 6 and after lessons with Kenny Clare worked with such names as Bill Lesage, Roy Willox and the Tony Lee Trio. He has spent recent years in the company of local groups big and small such as ‘Cool Blue’ and the ‘Sole Bay Jazz Band’. He is the ‘engine room’ of ‘The Palomar Trio’ in much the same way as was one of his idols with Benny Goodman’s trio – the great Gene Krupa.

For information about the Palomar CD  ‘TIME ON MY HANDS’ please email raysimmons@btinternet.com

Also, check out our other group JAZZ UNLIMITED.